THE HEEBIE JEEBIES Onstage 00:45 The Heebie Jeebies are an energetic cover band that knows how to rock the party. They deliver classic Indie/Rock anthems and can be heard performing

Radio Pachuco came into being in 2011 as the house band for Saturnalia cabaret, an ill-fated production involving some of Scotland’s great performers. As such they had to provide the background music for burlesque acts, feats of hypnosis and even a fakir hammering a nail into his head. Certainly not a squeamish band. As time has passed Radio Pachuco have become a tight 6-piece ensemble, playing a mix of swing classics, jazz numbers and songs of the 1950’s. Shying away from tired crooner material, their cool and fast-paced performance is a mix between Cole Porter and Etta James, and singer Sophie Adams’ voice will make you want to rummage through your grandparents’ record collection. 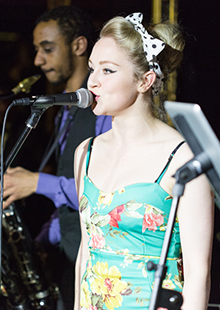 Since 2002, Rosy Blue has proved to be one of Scotland’s most popular and exciting blues bands. Led by Rosie Nimmo’s smouldering vocals and Stuart Allardyce’s stinging guitar work, the five piece put their unique spin on early blues through to rock, soul and modern classics as well as showing off their own accessible material. The band have regularly played at several Scottish festivals such as the Edinburgh and Glasgow Jazz and Blues festivals and the Dundee Blues Bonanza along with national events such as blues festivals at Maryport and Colme. As well as tearing up the place with infectious rock and boogie, Stuart and Rosie also have a side project (the Rosy Blue duo) which reveals their jazzier side showcasing swinging standards and intimate jazz re-arrangements of popular classics. The band are preparing to record their second album and are getting ready for a hectic summer of gigs and touring! 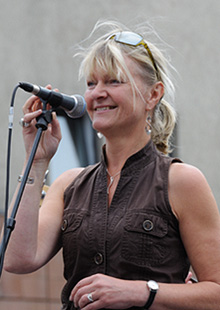 Early evening entertainment by the world famous Ged Hanley and his band! Every Saturday from 5pm!