GET CARTER, SPLENDID GENTLEMEN, FREE PBH COMEDY FROM 11AM

GET CARTER ONSTAGE: 00.30HRS Get Carter began in 2004 when James Mackie and John Elles got together to find out what would happen when James’s wild organ stylings

Get Carter began in 2004 when James Mackie and John Elles got together to find out what would happen when James’s wild organ stylings and pounding left-hand bass lines were combined with John’s urgent tub-thumping.  Both had spent a lifetime in music one way or another. Amongst others, James played for Two-Tone band The Selecter in the early eighties recording two albums, ‘Celebrate the Bullet’ and… ‘Dance Craze’ and touring extensively including sessions on John Peel, Whistle Test, etc.

Later he stepped in to Madness to take over on Piano in the mid 80s for live and TV work including ‘Saturday Night Live’ in New York, the Montreux Pop Festival and lots of other stuff that’s a bit of a blur quite frankly. John has played in too many bands to mention in the North West including The Permanents and The Rankin’ Popes supporting, amongst others, Generation X.

They practice a lot. When there’s just two pairs of hands – there’s nowhere to hide!

“They blew the bloody doors off!” Guardian.

“Scotland’s Most Gentlemanly Band”, Splendid Gentlemen dressed in their finest Gentlemen Threads, put on a spontaneous and passionate musical performance covering everything from 1950’s rock ’n’ roll to songs which are in the charts right now. Having been a working, professional band since 2010 they play literally hundreds (yes, plural) of gigs per calendar year. 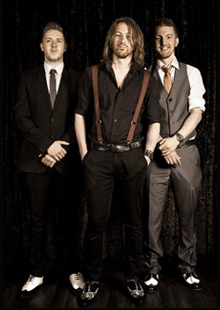