One of the best wedding bands out there! Playing all your favourite tunes and more! We bet they’ve got what it takes to get you on the dancefloor until the moment the last chord rings out!

THE PROCRASTINATORS
ONSTAGE: 00:30
Old school Rock ‘n’ Roll is the name of the game for The Procrastinators! Strong guitar licks and a beastly rhythm section will have you jumping all night

Old school Rock ‘n’ Roll is the name of the game for The Procrastinators! Strong guitar licks and a beastly rhythm section will have you jumping all night long!

Contemporary and classic blues with a smattering of jazz, a feel for the funky, a country twang and sometimes lighthearted twist.

These guys are one of the best rockabilly, blues bands we’ve ever had the pleasure of hearing on our stage! With a thumping double bass driving a hard rhythm they are sure to keep you dancing all night long! They provide an experience like no other band!

We welcome local legend, Chris Tracey, to our stage! He’ll be performing a couple of sets of bangers from through the years! Expect everything from massive pop hits to punk classics and all of it with a sprinkling of Chris’ interesting humour on top!

THE SIZE QUEEN
ONSTAGE: 00.45HRS
With the electric Size Queen you can expect everything from dancy 70’s AOR cheese to grinding 80’s metal, through 90’s grunge and beyond. Balls to the wall

With the electric Size Queen you can expect everything from dancy 70’s AOR cheese to grinding 80’s metal, through 90’s grunge and beyond. Balls to the wall vocals from Mercy (check out the guns!), pounding grooves from Steve, shreddin’ guitar from Dave and thunderous bass riffs from Tony. We’ll get your heart pumping, yer feet dancing and your whole body sweating and wanting more, more more!!!

The Blackjack Blues Band are an energetic 4 piece from Edinburgh. Drawing on influences from Muddy Waters, Buddy Guy, The Hoax, Cream, Frankie Miller and Dr Feelgood, you are guaranteed a night of foot stompin’ fun. See you at the crossroads!

Mike Breen fronts this powerful band! Enjoy Mike’s gravelly vocals which is backed up superbly by his band playing classic rock songs that will get you right up the front and showing off your moves!

Baba Yaga are an energetic folk fusion band with influences from far and wide – balkan, Americana, funk… We formed in 2017, having started as the wedding band in a performance piece at Kelburn Garden Party, and have been loving festival life ever since. “We are: Mo Ford – lead vocals, Derek Strange – guitar/vocals, Ben Errington – violin/vocals, Conal McIntosh – bass, Ben Sanchez – cajon. Some of our favourite things are 3, 4 and 5 part vocal harmonies. As well as writing an eclectic mix of original material, we enjoy re-working classic songs that get a crowd jumping! We’re recording our first EP and planning our second. We’ve had a lot of fun playing at venues around Edinburgh and the Lothians, as well as at Kelburn, Lindisfarne, Audiosoup and The Meadows festivals. Other notable gigs have included a gin cruise and a bingo Christmas party.
We’re often asked what Baba Yaga means – she’s a witch in Eastern European folklore, who flies around in a mortar & pestle and lives in a house in the forest on chicken legs. Whether she’s benevolent or malicious is unclear. Apologies to our Russian pals for our mispronunciation of her name (which we continue to do!)”

Local singer songwriter Chris Buckley  presents the longest running Open Mic Night in town. Just stick your name down at the bar from  8.30pm, the sets start at 9.30pm. Every performer receives a complimentary beer. House acoustic and acoustic bass guitars available for use.

Old Bohemia are Scotland’s premier acoustic duo featuring the versatile, dynamic guitar of Marc Molloy and the powerhouse vocals of Gillian Christie. They’ve toured all over the world and worked with some of the biggest names in the industry over the last ten years. In that time they’ve played to 10,000 people, worked with Sony, toured the U.K, Europe, Asia and the U.S and performed more than 1000 gigs along the way.

Whether your looking for a soul and blues sound for a champagne or cocktail bar, a rock and pop sound for an uptempo weekend, or background music for a restaurant or hotel atmosphere, their repertoire is versatile, classy and always putting the extra effort in to provide an unforgettable experience.

Lone Bear plays Early Blues and Country Rag on resonator guitar, banjo, blues harp and kazoo, with classics ranging from the ’20s to the ’60s as well as his compositions. He’s toured in seventeen countries across five continents performing in festivals, bars, restaurants, social dance events, hotels, pubs, cruise ships and private functions, and has recorded internationally with five albums and a live DVD produced in Brazil. His latest album was recorded live in Clarksdale, Mississippi at his appearance at the renowned Juke Joint Festival 2018, and across his discography more than 10,000 CDs have been sold worldwide. Joined by Georgia Slim on the washboard, Lone Bear Duo bring to the stage an authentic repertoire of rogue tales from the Deep South.

DIRTY BETTY
ONSTAGE: 00:30
Dirty Betty are an Edinburgh based Hard Rock & Blues Band playing covers and originals! A regular act on our stage! If you like your rock loud

Dirty Betty are an Edinburgh based Hard Rock & Blues Band playing covers and originals! A regular act on our stage! If you like your rock loud then look no further than Dirty Betty!

Cameo are a 4 piece rock, pop and indie band. Playing all your favourite hits from the last couple of decades! Expect tunes from The Arctic Monkeys, The Black Keys, Oasis and many, many more!

Carbon Copy are made up of four talented, professional musicians from central Scotland.
Our aim is to become Scotland’s premier live music band.

Our clients are our business – from weddings and corporate events to live sessions in bars, pubs and nightclubs, we cover all genres to give you the perfect soundtrack to your party.

Black Dog Days are a four peice rock outfit from Broxburn West Lothian. Started in 2013 the band has been through a few line-up changes over the years as they have worked to develop their sound. The band consists today of founding members James Wilson (Lead vocals and guitar) and Jamie Lando (Guitar and backing vocals) along with Scott Lackie (Bass) and Jack Wilson (Drums). In December of 2016 the band released their brand new single “AMY” and hoping to finish their debut album by the winter of 2017. The guys from Black Dog Days are in the studio throughout the year working on new material. With headline shows under their belt across Scotland the band played their first sold out headline show at King Tuts Glasgow late June 2017. Along with recording their first album they have been performing at some small festivals like Gig in the Goil and the Pumpherston music festival to name a few and hope to progress to larger festivals over the years. This lively act are full of rock riffs and catchy sing along choruses . “4 Guys with 4 instruments, simple.”

THE HEEBIE JEEBIES
ONSTAGE: 00.45HRS
The Heebie Jeebies are an energetic cover band that knows how to rock the party. They deliver classic Indie/Rock anthems and can be heard performing hits from

Radio Pachuco began its musical life as a classic swing and jazz band. However, influences of the 1950’s, classic film themes and current music began to inspire the band. Combining their love of old and new music, Radio Pachuco offered up “pop-swing” by remastering modern favourites into vintage style tunes which sit happily alongside jazz standards. Old and young find themselves dancing the night away in their own personal nostalgia. ”
Inspired by the internet sensation Postmodern-jukebox, Radio Pachuco have both covered and arranged a large number of modern songs in vintage swing style. The popularity of this “modern-swing” has seen the band perform at the Corn Exchange, Edinburgh International Conference Centre and as the house band for the premier of Hyena at the Edinburgh International Film Festival.

Their lively set has something for everyone to enjoy – whether you are looking for the classics of Benny Goodman, the guitar solos of Chuck Berry or perhaps, the unlikely swing covers of a cheesy 90s favourite!
The Dead Flowers are one of the most amazing bands on the scene today! Their set list is varied enough and packed full of total bangers that there should be something for absolutely anyone! Not a band to be missed!

Cow Cow Boogie are an Edinburgh based band who play their own brand of 1940s/1950s R&B, Western Swing, Rockabilly, Country & Jump Blues, that’ll get your feet tappin’ and the party started! A 5 piece band who play all over the UK at Americana/Blues/Country/Rockabilly/Jazz & Folk Festivals. They have 2 albums released on Rhythm Bomb records. Cow Cow Boogie are – Lead Vocals – Nicole Smit 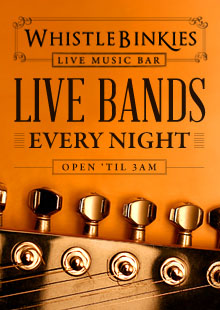